Tony Whitlock and Craig Revell talk to Scott McLaughlin and Ryan Story on what the Supercars Championship means to them and how development on the Mustang has progressed.

Tony Whitlock and Craig Revell discuss the final weekend of the year and look at the winners from the Supercars Awards Night. Craig Lowndes discusses 1996 and his entry into touring cars reflecting on the differences now.

John McGregor, Lowndes crew chief talks to Tony about his 8 years in Supercars and what it has been like working for Triple 8 and Craig Lowndes.

Jack LeBroq discusses being the best placed rookie in 2018, his thoughts after his first year and how he is preparing for 2019.

Matt Roberts is now the Team Manager for Tickford Racing, 13 years ago he was mechanic for Mark Winterbottom he talks about his feelings of Mark leaving the team and how they have grown up side by side in Motorsport.

Tony Whitlock and Craig Revell look at the McLaughlin – Van Gisbergen battle headed for Newcastle, meanwhile Jamie Whincup and Craig Lowndes will be having their own private battle for 3rd place in the Championship. And the Launch of Touring Car Racing Australia with a number of current and former Supercars Drivers.

Scott Pye discusses his best season in the Supercars Championship and how he is now balancing motor racing with his own media company.

Tim Blanchard talks about his retirement from full time racing, his highlights and what the future will hold for his driving career and his team.

Tony Whitlock and Craig Revell discuss the upcoming finale in Newcastle, Ryan Story (DJR Team Penske) provides an update on the progress of the Mustang following the teams two test days. He also discusses how the team is preparing for the Newcastle battle. Ryan also talks about the potential technical changes for 2019 and the likely hood of a 24 car grid.

20 years ago Bridgestone was announced as the sole tyre supplier to the Supercars Series, Kevin Fitzsimmons talks about what it was like to be part of the tender process and how it changed the sport. 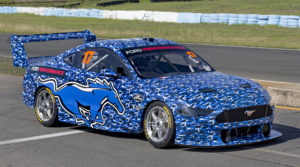 Tony Whitlock and Craig Revell are joined by Tom Howard (Speedcafe.com) and Stefan Bartholomaeus (Supercars.com) to discuss the racing and drama on and off the track in New Zealand. Park in controversy, Wheel spin controversy, and should DJRTP have protested the decision?

Retirements and driver changes, with the futures of Winterbottom, Stanaway, Caruso and Holdsworth yet to be confirmed. DeSalvestro commits to Supercars n 2019. and Who could be stepping up to the big show?

Will Supercars run at 24 cars in 2019. How Hawkeye could improve supercars

Triple Eight teams champion – 9 times, can anyone ever challenge this?

Can Scott handle the pressure ahead in Newcastle?